Networking sucks (or does it?) 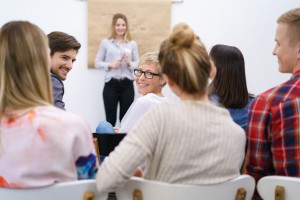 Networking – just the word itself can create fear and dread in so many people. You are required to stand around and talk about yourself, you have to talk to complete strangers, there is generally no where to hide and half the time you just never meet anyone worthwhile.

“Networking can be a total waste of time. But your attitude towards networking will either hold you back, or provide you with a strategy to survive.”

Over the months of August and September we have conferences and awards night a plenty. This makes me nervous. Most people think I must be an extrovert as I like to blog, I like to have an opinion, I am quite loud, I wear bright clothing. But that is just not true. I would love to just sit in a dark corner and listen to the speaker, or even just sit on a table all to myself.

“Sitting on my own would be boring – true, but at least I wouldn’t have to worry about networking and god forbid talking to strangers.”

So how do you survive a networking event or conference without the anxiety taking control.

Here are my top 5 tips for those introverts out there:

1.Don’t overthink it. Look around the room. Do you really think you are the only introvert there? Hell no – probably about half the room is just as freaked out as you. There are so many people in exactly your shoes just waiting for someone to start talking to them. Inwardly screaming, someone please start a conversation so I don’t look like I have no friends. So be brave and strike up a conversation. If you are really anxious, just pick someone on their own, then build up to more people as you go. Have a question ready to do – Have you heard this speaker before, What did you think of the lunch, Which stalls have you visited, Have you been to this event before, etc. That way if you get tongue tied, you have a plan.

2. Don’t throw your business card at anyone. My golden rule is never hand your business card out unless someone asks you for one. Those who throw cards at me like confetti get thrown in the bin (and are often used as examples in my ranty blog posts !) Yes, I know it is a networking event, but I don’t want to be sold to especially if it is something I am purely not interested in. Don’t become the “used car salesman” of the group. Instead, sit back, take it all in, and if you make some genuine connections, then let the business card throwing be an after thought.

3. Speak, but listen first. Often, networking events get a bad rap as people just talk talk talk talk talk. And even if you wanted to, you can’t get a word in edge ways, so you just tune out and think “When will this nightmare be over?” Talking someone’s ear off is not a great first impression. Instead, listen to others stories, listen to their goals, their aims, their vision, their problems. Then you can truly contribute to the conversation and bring value, rather than just endless dribble.

4. You are there to connect, not sell. This may seem counter productive to those who just love to sell, but networking is not about looking around the room to find your next victim. Even if you speak to someone and think, gosh I could never use their services, you just don’t know where that connection will lead to. They might know someone who can fix your problems, they might be the perfect mentor, they might have supplier contacts who can help you out. Never discount someone if they are not interested in your services. Genuine connections is what helps you sell.

5. Be you. The real you. And if you need time out, take it. Most networking events and conferences can be full on. I am heading to the annual Xero conference tomorrow (Xerocon) and my guess is there will be over 1000 people there. Just a guess. YIKES. That is a lot of people. But the only way I will survive is if I am me. That starts with what I wear – I need to be comfortable. I refuse to “dress up” just because other people might dress up. I will start slow and say Hi to a few people I know, then ease my way into other groups and then random strangers. I know throughout the two days, I will need a bit of “me time” so I might sit up the back on the floor (back issues makes this comfortable for me) during one session just for a break. Nothing wrong with that, it lets me recharge for the next round of chats.

“So yes, networking can be a total ball breaker. But if you head to an event or conference and have the mindset of “what am I going to get out of this for me” then you are approaching it all wrong.”

You should be looking to make connections, listen to stories and dare I say it, have a bit of fun. And just keep in mind, that half the room will be just as petrified as you, so you are far from alone. Find someone, smile and just ask them a casual question to start with and see what happens. I am pretty sure the conversation will flow freely pretty quickly if you just don’t overthink the entire process.

If all else fails, take a wing woman (or wingman) with you but give yourself time to spread your wings and tackle it alone. The more you challenge yourself, the easier the networking will become.